Once again, we'd like to express our immense gratitude for your patience and understanding.

Currently, we have released the latest version of Stella Character Generator, Version 1.2.2. This version is now considered legacy mode. 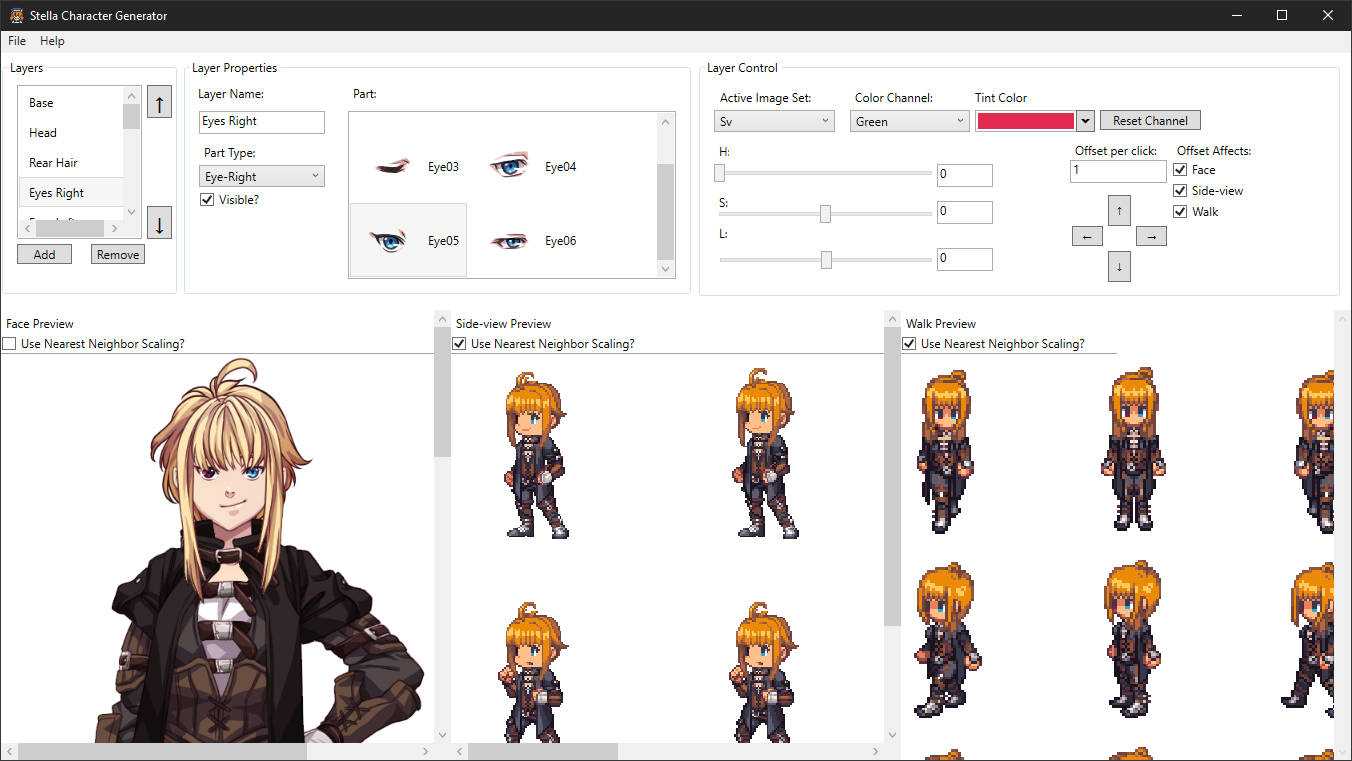 Thank you very much for your time and reading this post! If you have any questions,  please don't hesitate to ask us!

Give your original characters life with full body portraits, sideview, and top down character sprites!

Hi, I recently purchased the character generator and noticed that both body types for the male character base are the same in version 1_2_2.zip with the (character's) right arm held up.

Please download the old version, grab the resources you need and replace the one in the new version. It was an error on our part.

Hi, I'm really interested in this! Love all of this!

Is it possible to use the full-body sprites in engines like Tyranobuilder? Are there any other poses for them?

Yes you can use them in any game engine. So far we only have 2 poses. We are still unsure if we can provide support for more than that.

But my question is the next: How does It fit with the standard RPG Maker MZ? I mean, maybe a lot of things has to be changed to fit it correctly.

By default, the sprites will work with RPG Maker. Just make sure to add a "$" sign on the walking character graphics. The Sideview Battlers should work without changes. You might need to adjust the weapon handling but we don't provide tech support for that.

I know this has been asked before, but as it has yet to be answered and I really love the character generator but find it as of yet kind of limited - are there plans to expand it? If so, do you have a rough estimation about when? Your last post about this I could find was from half a year ago after all....

Hi, yes we are planning to do update and we have a discord channel for Stella Character Generator. Currently, we're working on making the editor better.

how do i get weapons to fit in the sv hands

It would depend on the engine and script you are using and is outside of Stella Character Generator support.

Hello! The 16x16 sprites seem to be missing from version 1.2.2, is this intentional?

We made a mistake and we're sorry! For now, to use the 16x16 it might be better to use the old generator. We're very sorry for the inconvenience.

Hi VisuStella hope all is well!  Love this tool one of my favorites on the market, but really hoping for a new updated version so I can use the side sprites.  Wondering if you have a possible release date window on 1.3? Thank you!!!

Thank you for the response.  I was aware of the side sprites but the color palette wasn't working.  It was my mistake of not using the 'Active Image Set' compared to version 1 where it seemed to auto update the 'views' colors.  Makes more sense now thank you!

Any idea when new body types are to be added? Many of my male characters aren't exactly buff...

Interested in that, too. Any news on an update?

I love it, however, I would rather it be closer to the RPG Maker MZ Character Generator from Schlangan Hadet, And add taller sprits please.

Hi, we're not making any RPG Maker specific assets.
Our sprites are 72x72.

So I have the 1.1.6.0 version, do I have to buy the newer versions or can I just update to the newest version?

If you check the store page, you should be able to download both versions.

I'm having problems with importing the animal parts dlc just now. I tried putting it together many times but everything results in an error and instant crash upon opening.

We apologize for the inconvenience. The current Animal Parts DLC is only compatible with the old version. We have to update all of them to work with the latest update.

I bought the animal dlc and followed the instructions for importing the parts but for some reason i keep getting an error saying that parts are not found and I can't find them in the drop down menu. Has anyone made a proper visual tutorial?

We apologize for the inconvenience. The current Animal Parts DLC is only compatible with the old version. We have to update all of them to work with the latest update.

Not sure what happened but both my male poses are the exact same. Help?

Please download the old version and replace the pngs in the new one. There was a mistake.

I found them thank you. Turns out it was an issue with more than just the pictures since the parts feature is coded in to find the route of where the pictures are I had to alter the code to reflect the new battlers or else they wouldn't appear from just copy pasting them in. Great work though guys this engine is amazing and I hope to see more wonderful artwork from you guys!

Hey there. With 1.2.2 when I change colour for an image set it does not replicate across the other image sets (face / sv / walk).

Also, when I go back to an image set to find the colour range so I can manually change the others (inefficient!), the sliders have reset to zero.

Hi, we don't recommend using the sliders and instead use the color swatch palette. We have a lot of issues with this old version that's why we're remaking it.

Many thanks for the Reply.

So do you still have to manually apply that colour to Face / SV and Walk?

I am using 1.2.2 and if I chose a colour it only applies  to the view I am working on and not the others.

It's no problem if this is being addressed in a new version.

We apologize for the inconvenience. We are updating the new editor to not be as tedious with recoloring. Please be patient with us and thank you for your support!

I bought your generator a year ago, do i have to buy it again now to get the updates?

When the new version will release and what's the new feather? I can't wait more to see the new tools!

We made it multiplatform and a lot faster when recoloring!

You can explain what is that about legacy,because people what buy know what is that,why is deleted DLC UPDATES and all that,is weird.

We explained in the blog post that the CURRENT software is in legacy since we're working on a NEW version that's far improved than this version. Something we have been writing about on previous updates. :)

It also means whatever bugs this current version (1.2.2) has will not be fixed. Any buyers of Stella will still get the new version for free.

If you bought early access, you can still access the page. The Early Access ""DLCs"" is already in this version of the software. We added two last DLCs for people who supported us early on, and more importantly, wasn't going to be part of Early Access. They are for people who had been waiting patiently that are not part of the main software. Nothing is deleted.